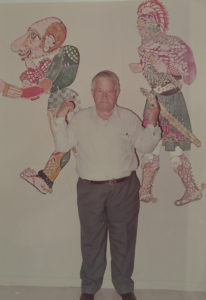 Our love for the shadow puppet theater was inherited by Spyros Kouzaros as he wanted people to call him, rather than Kouzis, his real surname, that was one of the most famous and talented puppeteers of his time. He kept company, gave smiles and advice to young people of his time writing his own history in the Shadow Theater.

Born in Athens at Kolonaki, in 1913. At the age of 10 he began to watch performances of the great shadow puppeteer Dinos Theodoropoulos (the American), who played in the Dexameni, in Kolonaki. Charilaos Petropoulos, played there too. Theodoropoulos was from Patras and had very beautiful figures made from "transparent substance," and was his best assistant. Near at 1933 learned many shows like "Red Devil”, "The gallows Patriarch Gregory V", etc.. When he left, he played with Pantelis and Takis Melidis at small Zappeion's theater of Stamatopoulos, the Hangman of Patriarch. The great actress Marika Kotopouli also watched this show.

He started as a puppeteer at 1934 in Kifissia theater of Dhaka with great Manolaros. Then he played in many regions of Athens and the district area. He had natural and painting talent, so he painted and carved very beautiful figures from a young age. In his artistic path, many of his colleagues used his own figures, commercials and scenes. His acting and imitative ability was also unique.

He worked with the Folk Art Museum, to which they are exhibited representative creations of him, as in other museums and private collections. He wrote and adapted several performances for the Shadow Theater, that are played until today by many puppeteers like ‘‘The repentant chief of robbers”, ‘‘Oedipus Rex”, ‘‘The hob of hell’’, ‘‘The Genovefa’’ and ‘‘Kantilakia of Hades’’. He died at 1992 at the age of 79 in Agioi Anargyroi where he stayed after the war.

His son Anastasios Kouzis, who was born in Athens in 1959 studied with him the art of shadow puppet theater in its entirety in his long artistic career. Already since the early 1970s he is presented to the public as the "younger puppeteer." He studied Classical Literature at Athens University and served in the private and public education for almost 35 years, continuously constructing at the same time many figures, scenes, commercials and recapturing rare performances of shadow puppet theater. Today, retired, continues with his three children the legacy of Spiros Kouzaros, composing ‘‘Historical Chronology of Shadow Theater and Puppets”, publishing studies and articles, giving lectures and showing classic performances.

“Ergastirio Skion Kouzaros" is a project for the promotion of shadow puppet theater to the general public based in Athens, Greece through a more modern perspective and closer to the modern viewer’s stimuli he receives daily, while keeping its basic components unalterable.