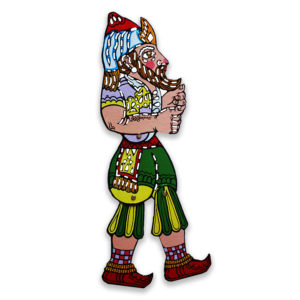 Ο Theodoros Kolokotronis, the "old man of Morias", the Hero of Dervenakia in one of his paintings by Spyros Kouzaros, completed by Anastasios, his son.

Ο Karagiozis as a revolutioner, plays a basic role in all heroic performances, near the heroes of '21.

Theodoros Kolokotronis was born in Ramovouni, Messinia, on April 3, 1770, and died in Athens, on February 4, 1843. He was a Greek general and leading figure of the Revolution of 1821, chief, plenipotentiary, advisor of the State. Acquired the nickname Geros of Moria. After his death, he was honored by the Greek state with the rank of Marshal. For further information you can visit the Wikipedia article:
THEODOROS KOLOKOTRONIS WIKI

You can find more figures here

There are no reviews yet.

Be the first to review “Pyrrhus” Cancel reply

Handmade shadow puppet theater figure that depicts Karagiozis as a revolutioner of 1821. Karagiozis as a revolutioner plays a leading role at all heroic shadow puppet theater performances, next to the biggest heroes of 1821. Type: Carved, colored cardboard figure, deified. He has an additional fez hat and a sword. Height: 60 cm

Handmade shadow puppet theater figure that depicts Karagiozis as a Prophet. Unique figure of Spyros and Tasos Kouzaros. Sample of the economic spirit of the "poor" shadow puppeteers who did not throw anything away and utilized everything. He has two mobile hands and its style is mixed. Type: Mixed (Bare torso with skirt and legs, "illustrated apotheosis"). Height: 61 cm

Handmade shadow puppet theater figure that depicts Karagiozis as a baker. Figure for the homonymous play. Type: It is carved, stripped (ie with large carves) and covered with "cigarette paper", colored, painted with Chinese ink. It has a separate "black and white" style wood stove. Height: 62 cm

Handmade shadow puppet theater figure that depicts Karagiozis as an ancient. Figure for all the performances with an ancient Greek story from Oedipus Tyrannus and the Trojan War to Alexander the Great with the Serpent or Antiochus with the 7 Beasts. He carries a sword in his mobile hand. Type: It is carved, stripped (ie with large carves) and covered with "cigarette paper", colored, painted with Chinese ink. The hands are drawn with white paint. Height: 62 cm

Discover the world of the Greek Theater of Shadows, acquiring one of our handmade figures, of the main heroes with a built-in wooden spring made by the hands of Kouzaros, ideal for young and old, as the game with the shadow has no age! The figures are made of cardboard, are carved, colored and are ideal for decoration or children's play. The spring is made of wood. Height: 28 cm.

Handmade shadow puppet theater figure that depicts Beligekas. Dervenagas of Ali Passa of Ioannina. He embodies every form of violence Ragiades suffered during the Turkish occupation. From the older forms of the shadow theater with the first one that from Thessaly. His awe-inspiring opponent is only Barbagiorgos. Type: It is carved, stripped (that is, with large carves) and covered with "cigarette paper", colored, painted with Chinese ink. Height: 96 cm 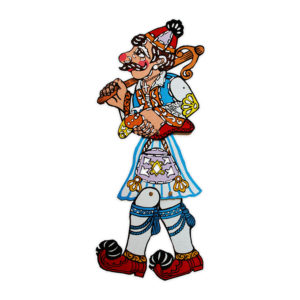 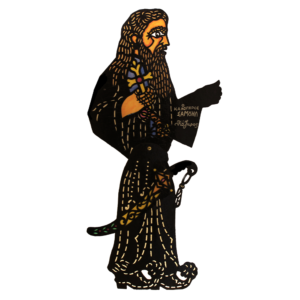